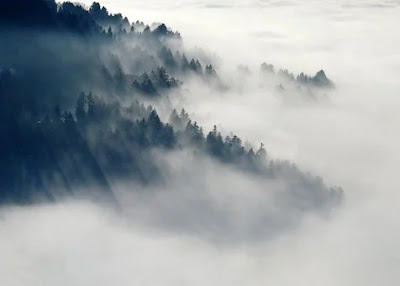 Your life is like the morning fog—it’s here a little while, then it’s gone. James 4:14b NLT

No one said living like a fog was easy.

The fog rolled in, but not because outside cold air collided with warm air. Our rented house reeked with age—constructed in the early 1900s. Although not exceptionally spacious, the ceilings boasted of their height, and the owner had decided to put only a tiny amount of insulation in the attic area. Summers proved pleasant. Since the house was not airtight, an atmosphere of freshness pervaded.

But winters told another story. Cold air seeped through every crack and crevice. We could only afford to set the thermostat at sixty-two degrees, which meant we stayed bundled up all the time. Even on that low temp, our electricity bill was almost unbearable.

Taking a shower during the cold months brought the fog from outside into our house. The hot water collided with the cold air in the house, creating a thick fog in the small bathroom and covering the small window above the sink, making it impossible to see. Within minutes of turning off the shower, however, the fog dissipated.

When taking a shower recently during a Canadian cold snap, I thought of that old house and the good times my wife and I had there, despite the frigid interior. I also thought about my life. I remembered the Tennessee summers when I was a middle schooler and how they seemed to last forever. My friends and I played outside until dark—almost nine p.m.—letting our imaginations run wild. Time seemed to last forever.

Now, at almost retirement age, I know I have more years behind me than in front of me. What seemed to once pass slowly now passes quickly. Although I know my eternity ahead is long—and I’m sure where I will spend it—time on earth seems short. Like a fog, it is quickly disappearing.

James reminds us life is like a fog. God may give us many years on earth, but compared to eternity, they are brief.

We only have enough time to love God, love our families, love others, and love ourselves. And in the process, only enough time to do God’s will. When younger, I didn’t think about the impact I’d leave behind after my death—but I do now. With intentionality, I attempt to do only those things God wants me to do—things that will continue to impact others after I’m dead and gone. After all, this fog will lift.

What are you doing that will impact others after you have left this earth? Are you living like a fog?

Prayer: Father, give us the grace and wisdom to live with intentionality, knowing our lives are brief.