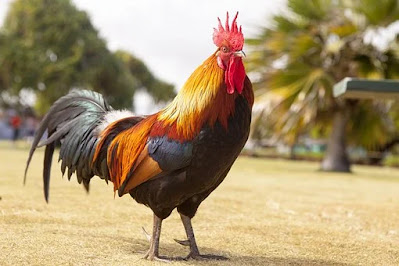 But if you fail to keep your word, then you will have sinned against the Lord, and you may be sure that your sin will find you out. Number 32:23 NLT

He loved to fight, but one day he fought the wrong thing.

I once housed twenty-five chickens, among them four roosters—and among those four roosters one named Rochester. After a series of bad life events, I decided to move in with my parents for a while until things settled down. My brother had as many chickens as I did, so when we combined them, we had a yard full of chickens.

A mean streak ran through Rochester. Each day as I entered the pen to feed them and gather eggs, he made his attack. I wore rubber boots and fought him off with a good swift kick. Nothing about his antics changed when I moved, other than that my parents had two dogs.

Curious about the new crop of chickens, the two dogs often stuck their noses against the fence for a smell. Rochester didn’t appreciate the intrusion and laid into them with spur fury.

Did I mention Rochester also had a habit of flying out of the pen? One day, when I arrived home from work, I noticed feathers scattered across the yard. Rochester wasn’t dead, but the two dogs had stripped him of his feathers. His sins had found him out, and he never flew out of the pen again.

Three Israelite tribes wanted to settle on the eastern side of the Jordon rather than the western side. Moses was angry over their decision, but they promised to help the other tribes conquer the Promised Land before they settled on their land. Moses agreed, but warned them if they didn’t, their sin of lying would find them out.

Sins and consequences go hand in hand. God designed it that way. When the first created couple disobeyed, they immediately felt shame and hid from God. The remainder of the Bible—and history—is filled with examples of sin being discovered, along with consequences.

I’m personally glad God designed the system to work this way. If He hadn’t, I’d go on in my sinful way, never realizing this wasn’t the best way to live life. So would everyone else. And the mess our world would be in wouldn’t even compare to the mess it’s in now.

So rather than hating it when consequences follow your sinful words or actions, thank God that He’s designed consequences to guide you back onto the right path.

Prayer: Father, thank You for discovering our sins and letting the consequences follow.

Tweetable: Have you discovered sin's consequences?