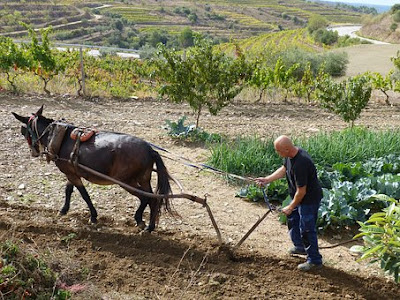 But the meek shall inherit the earth, And shall delight themselves in the abundance of peace. Psalm 37:11 NKJV
Plowing with a mule requires a great deal of meekness.
At twelve years of age, my grandfather was left to run the family farm and tend to his mother, sisters, and brother. A task he might not have been able to handle had it not been for an uncle who helped him.
Mules were used for plowing fields, but mules could also be stubborn. And so could Uncle Ransom. He had a habit of fussing the mule out, which resulted in its stubborn refusal to move or either a crooked row. My grandfather would intervene, talking gently to the mule. The mule would cooperate and plow a straight row.
Eventually, my grandfather left the farm and began selling ice, then milk, and finally ice cream. Many a customer was gruff with him or with other delivery companies. But my grandfather’s meekness had a way of winning over those stubborn customers.
According to the psalmist, the meek will be rewarded with the earth and with peace. Jesus says a similar thing thousands of years later in His Sermon on the Mount (Matthew 5:5).
Some associate meekness with weakness and avoid it like a plague. But the two are not the same. Meekness is power under control, just as the mule controlled his temper and his ability to harm the person wanting him to work and rather worked for the person giving the orders.
David demonstrated meekness when King Saul attempted to kill him and when he fought the giant Goliath. Jesus demonstrated meekness when He refused to retaliate against those who abused Him and tried to take His life.
I demonstrate meekness when I follow their examples. I may have rights and power, but I voluntarily give them up when I have the chance to retaliate, to become angry, to plan revenge, or to undermine those who harm me. Meekness is acting as Jesus did. It’s a willingness to take the lowest place, letting Christ elevate me instead of me attempting to do it myself. It is understanding that greatness in God’s sight is not how many people serve me but how many people I serve.
The inheritance and peace that come from being meek come from knowing I’m living as Christ wants me to live. And in eternity, I’ll be rewarded.
Be meek, not weak, and look for the rewards God will give you now and later.
Tweetable: Have you learned to be meek?


Prayer: Father, give us an attitude of meekness, and teach us to respond in all situations as Christ would.