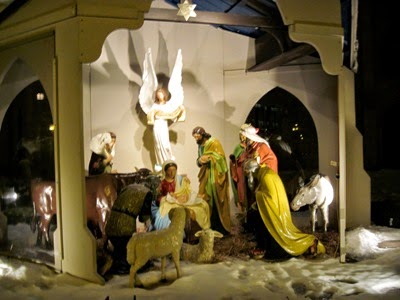 Objective:
Children will learn about God sending his Son to be born to human parents with the ultimate goal of dying for everyone’s sins.

Say:
Today we begin a new theme entitled, “Who Is Jesus?” For three weeks, we will look at four important events in the life of Jesus: his birth, his baptism, his death, and his resurrection. Knowing who Jesus was is important; knowing who he is and choosing to follow him as our Savior is even more important.

Say:
(Display the following verse where the children can easily see it.) Let’s say our memory verse together. For there is born to you this day in the city of David a Savior, who is Christ the Lord. Luke 2:11 NKJV

Icebreaker Questions:
If someone asked you who Jesus was, what would you tell them?

Why do you think God sent his Son to earth?

How do you think it made your parents feel when you were born?

What amazes you about a baby being born?

Reflection: Can you tell one thing that was different about Jesus’ birth? (Emphasize that God was his real father; Joseph was only his earthly father.)

Four hundred years had passed since anyone had heard from a prophet of God. Suddenly, one appeared out of the desert. His clothes were made of camel’s hair, and he ate locusts and wild honey. People didn’t particularly like him because he told them what awful sinners they were and that they needed to stop doing evil things. His name was John the Baptist, and he was the cousin and forerunner of Jesus.

While John’s mother, Elizabeth, was pregnant with him, Jesus’ mother, Mary, was also pregnant with Jesus. Mary was a young girl, probably a teenager, who lived in Nazareth, a town in the region of Galilee in the nation of Israel. God selected her to be the mother of his Son. He sent the angel Gabriel to tell her the good news.

Mary was somewhat confused by the angel’s message. How could she have a child? She was engaged to a man named Joseph, but they weren’t married yet. The angel told her she would become pregnant by God’s power, not a man. Even though Mary didn’t understand all of this, she agreed to obey God’s will. She said, “I am the Lord’s servant, and I am willing to accept whatever he wants.”

Reflection: Should we always be ready to do what God asks whether it makes sense or not? What if it means others might laugh at us?

Mary was no doubt frightened. Having a baby without being married was against God’s law. She could be stoned to death. And what about Joseph? He would think she had been unfaithful to him. Sure enough, Joseph was disappointed and angry. He thought Mary loved him. Now it appeared she had betrayed him. He would have to break their engagement and find someone else to marry.

Reflection: What’s one thing God might ask you to do that would frighten you?

As Joseph slept and thought about what he was going to do, an angel appeared to him. The angel told him not to be afraid to marry Mary. She hadn’t been unfaithful to him. God had caused her to become pregnant. She was going to have God’s Son, and they were to name him Jesus. Joseph listened and married Mary.

When it was almost time for Mary to deliver her baby, the Roman emperor made a decree for a census. This caused people to return to their homeland. Since Joseph was a descendant of King David, this meant he had to make a long journey south to Bethlehem.

Reflection: How uncomfortable do you think it was for Mary to ride a donkey while she was pregnant?

Bethlehem was around 70 miles from where Mary and Joseph lived. That’s a long way to walk and ride a donkey. When they got there, the town was crowded with people—so many that there was no place for them to stay. Finally, someone offered them a stable—probably a cave where animals were corralled. Here in a smelly, damp, dark cave, God’s Son was born. Mary wrapped him in strips of cloth and placed him in a feeding trough. He would be a king and save people from their sins, but his beginnings were to a poor family.

God sent his Son because he loved people. He knew the only way people could be forgiven for their sins was for an innocent person to die in their place. His newborn Son would eventually do this. While we celebrate the birth of Jesus during Christmas, we should celebrate it throughout the entire year.

Transition:
God loved the world so much that he gave his only Son to die for their sins.

Away in a Manger

Wrap Up:
Let each child tell one thing they learned about Jesus’ birth.