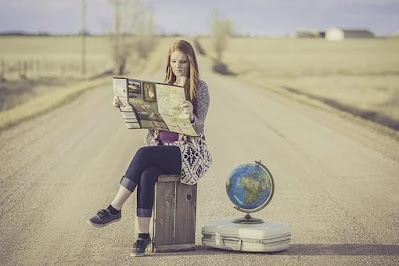 They broke that covenant, though I loved them as a husband loves his wife,” says the Lord. Jeremiah 31:32b NLT

Before I took on the task of driving, my dad made sure I knew how to read one.

Back in the day, when dinosaurs roamed the earth, things called road maps existed. And everyone who wanted to go somewhere they’d never been before—or had not been in a long time—used one. Unless you knew someone who could give directions, no other way of knowing existed.

Maps were interesting. Squiggly lines covered them, along with symbols of various types. A key told the reader what the symbols stood for and gave a mileage chart so the traveler could determine how far one point was from another. All of this seems mighty out of date now.

Now that GPSs, Google Maps, Siri, and other satellite-based applications have taken over, knowing how to read a map is almost an extinct practice. If I want to travel somewhere, I plug the address into Google Maps and let the voice tell me every turn to make to get there. The app also calculates my arrival time, tells me about traffic conditions, and lets me know the fastest route to my destination.

Whether reading a map or using technology, I must follow directions to arrive at my destination. Ignoring them will take me in the wrong direction and to the wrong place. It did for God’s people of old. After delivering them from Egyptian bondage and leading them to Mt. Sinai, God instructed Moses to climb the mountain. God gave him and the people the Ten Commandments and other ceremonial and moral laws there.

By Jeremiah’s time, the people had done a miserable job of obeying. God told of a future time when He would make a New Covenant that He would write on their hearts, rather than stone tablets. In the meantime, He would send them into captivity as punishment for their disobedience.

Just as the lines and symbols on old maps had a purpose, so do God’s principles. God has recorded them in the Bible.

When we follow His road map, we end up at the right places: forgiveness, salvation, peace, abundance, and joy.

God’s rules are not His opinions. We can debate them, but we won’t win. They are absolute truths He won’t change His mind about. What culture says, or what we think, doesn’t matter. And if we choose to ignore them, consequences follow, as they did for the ancient Israelites.

On the other hand, obeying them gets us where we need to go and where God wants us. Life is always better when we follow God’s directions.

Make up your mind to learn and obey God’s directions, regardless.

Prayer: Father, give us the courage to obey Your road map for our lives.

Tweetable: Are you following the right map?