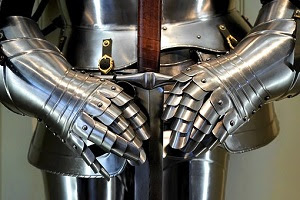 Put on all of God’s armor so that you will be able to stand firm against all strategies of the devil. Ephesians 6:11 NLT

She unzipped her binder, took out a folded piece of material, and announced her preparation.

Kids do the darndest things, and this particular sixth grader was known for her share of antics. One of her classmates had been sick all week, coughing almost continuously. Since she’s a germophobic, his coughing drove her crazy. She constantly scolded him to cover his mouth and to go outside the room to blow his nose. He wasn’t as worried about germs as she was, which drove her even crazier.

She and her classmates avoided him like the plague, scooting their desks away from him or sitting on the other side of the room. Finally, she’d had enough. As I stood in the doorway of my room waiting on the bell to ring, she proudly announced, “Look, Dr. Wiles.” And then I saw it.

Tucked in her binder was a folded hazmat suit. I asked where she got such a thing. She had discovered it in her garage. She preceded to put it on, complete with hood and mask, and wore it during the entire class. She considered herself armed against the germs of her coughing classmate—and any other germs she might encounter.

Paul talks about another kind of armor. The kind believers wear to protect themselves. A breastplate of righteousness, a belt of truth, shoes of peace, a shield of faith, a helmet of salvation, and a sword of the Spirit.

God knows we live in a dangerous world, germs being the lesser of many enemies we encounter. Germs may lead to an illness—and even to our death—but the greater enemy seeks our soul for eternity.

A part of wearing the armor is making sure I don’t put myself in dangerous situations that make giving in to the temptation easier—as my young student did by wearing her suit. The company I keep influences me. And bad company usually corrupts good morals.

Put on God’s armor daily when you get up. Then you’ll be fully armed, prepared for whatever temptation you face.

Tweetable: Are you fully armed for your battles?

Prayer: Father, thank You for arming us to do battle with the enemy of our soul.