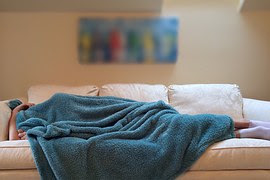 I come from a family of nappers.

Power naps. The men on my father’s side of the family believed in them. When supper was over and the kitchen cleaned, my grandfather would sit down on the couch to watch the news or a football game. Several minutes later, his head was bowed.

My father’s profession allowed him time to nap during lunch. And he did. When lunch was over, he retired to the recliner where he took a fifteen-minute nap. No alarm clock was needed to awaken him.
I’ve followed in the tradition. When I can, I take a power nap after lunch. In twenty minutes or so, I wake up. I know how to take a nap.

“I’m awake,” she says—followed by snoring.

“Are you gonna get up?

After several episodes of this, she finally gets up.

God doesn’t sleep—or even take naps. But it seems as if He did to the psalmist. He was being falsely accused of trying to kill the king and take the throne. Although God had selected David as the next king of Israel, David needed God to wake up and deal with his accusers.

God’s time frame is different than mine. To me, it may appear He’s sleeping when in reality He’s only napping. He sees the injustices in the world and those committed against me by others—as He did David’s, but I must trust Him to act according to His timetable, not mine.

What appears as bad or an injustice to me might not to Him—so He naps. I normally thought my parents’ punishments were bad for me but later learned they weren’t. I have to trust God to do what’s best as my heavenly Father.

Nor is revenge mine. David could have dealt with his accusers, but he chose to ask God to instead. God says revenge belongs to Him, not us.

In times of trouble, call out to God. But remember, He never naps or sleeps, and He is always concerned about what concerns you.

Tweetable: Do you ever go to sleep on God?

Prayer: Father, thank You for always coming to our rescue, even when it appears You are sleeping and unconcerned.