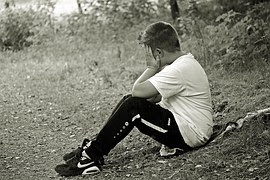 I will boast only in the Lord; let all who are discouraged take heart. Psalm 34:2 NLT
After thirteen years of marriage, her discouragement had reached a new low.
Michelle married as soon as she could. She was looking for a way out and found one in a relationship with a young man her parents disliked. She wasn’t interested in their opinions; she wanted to escape. As soon as she could, she married.
Soon after the wedding, Michelle discovered her mistake. She had married a loser. He migrated from one job to another. Had it not been for her job and her parent’s help, they would have drowned financially. Worse yet, he was an abuser: physically, emotionally, and spiritually.
Throwing objects at Michelle and hitting her in places where the bruises wouldn’t show was her husband’s normal pattern. He topped this off with a continual barrage of insulting remarks, belittling her while building himself up. And he never supported her spiritual pursuits.
After thirteen years of misery, Michelle was depressed and discouraged. She feared he’d kill her if she left, but she didn’t see how she could stay. Finally, she mustered the courage to leave. While he was at work, she packed her things and headed to her parents’ home. One year later, her divorce was final and she soon married a man who gave her the love and respect she deserved.
According to the psalmist, Michelle went to the right place with her discouragement: the Lord. Now she boasts in what God did for her. She tells people she married the devil the first time but an angel the second time. I don’t feel like an angel, but I’ll take the compliment.
Instances that can lead to discouragement are the bane of living in a sinful world. While there have been a number of occasions when I’ve slipped into discouragement, I choose not to live there. Because I believe God controls my circumstances, I choose to see them differently than I would have had I no one to turn to.
God never allows us to enter potentially discouraging times without a purpose in mind. What could discourage me can also mold me more into God’s image as well as prepare me for something He has in mind for me. Facing tough times also gives me ammunition to help others who may be passing through similar experiences as I have faced.
Don’t waste your discouragement—but don’t live with it either. Ditch it.
Tweetable: Don't waste your discouragement.


Prayer: Father, thank You for giving us the power to overcome discouragement.