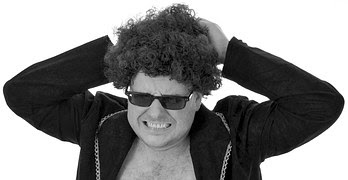 Stop being angry! Turn from your rage! Psalm 37:8 NLT
His answer to the ills of his life was to stick out his bottom false teeth.
Ronnie was twice my age, but we soon became fast friends. His life had been a series of downturns. Most recently, back surgery. I was hired to make up for the work he couldn’t do because of his back limitations. He was on desk duty, so I became the gopher who did the heavy lifting in the warehouse.
I felt sorry for Ronnie. To be sure, he had made some bad financial decisions, but his surgery had set him back. Family members were almost non-existent—and so were friends. He borrowed from his workmates—a practice which put him further behind.
The thing that stood out the most about Ronnie was his angry attitude. I could understand his frustrations. His life had been and was tough. But to stay angry all the time? His anger wasn’t an episode; it was a state of being.
I was eventually laid off and moved away, and I lost track of Ronnie. Through a mutual friend, I found out he had contracted a disease and died. I asked my friend if he had changed, and he said, “He was the same ole Ronnie.” Sad.
The psalmist gives good advice when he says to stop being angry. While it’s possible to be angry and not sin, it is difficult. Most of our anger erupts in sinful attitudes, words, and actions. Being angry over sinful situations is permissible—and I should be as a Christian, but acting in sinful ways to remedy them isn’t.
Anger is often a result of my unwillingness to forgive those who harm me—or even to forgive God for the things I perceive Him as allowing or bringing into my life when He has the ability to prevent them. I think deep inside Ronnie was angry at God for his miserable life. Unforgiveness destines me to live in a perpetual state of anger. Forgiveness releases me from it.
Good anger will motivate me to use the adrenaline produced to act in beneficial ways. If I’m upset by abortion laws, I don’t shoot abortion doctors—but I can use my rights as a citizen to try to get them changed.
Don’t live in a state of bad anger. Rather, turn your anger into good actions that benefit God’s Kingdom.
Tweetable: Is anger destroying you?


Prayer: Father, take away our negative anger and replace it with actions that benefit others.