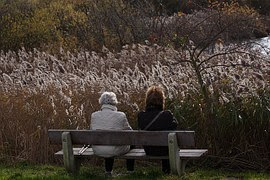 The ropes of death entangled me; floods of destruction swept over me. The grave wrapped its ropes around me; death laid a trap in my path. Psalm 18:4-5 NLT
The thought of experiencing it unnerved me—even though I claimed to be prepared.
While a pre-teen, the fear of dying overcame me. As a nine-year-old, I had accepted Jesus and knew He had a place in heaven for me, but I feared what I had to experience to get there: death.
A few years later, relatives began dying. First, my paternal grandfather’s unhealthy living habits finally caught up with him. A couple of years later, he was followed by both of my great-grandparents. Soon after, the remainder of my grandparents died. Now at 56, I have lost one parent, and my wife and I know our remaining parents won’t be here forever.
Old age wasn’t why David feared death—he wasn’t old. A jealous king was on his trail, and he was running for his life, hiding in caves and in the wilderness. Death seemed near at all times, but God preserved his life. King Saul didn’t kill him—but was killed himself, and David was made the next ruler.
Only a very few welcome the thought of death. Regardless of how tough circumstances might be or how intense the pain of disease or other body ailments can get, most don’t wish for death. Rather, they pray for healing or for God to soothe the debilitating situation. But the healings of diseases and the removing of stressful situations won’t stop death. Barring the return of Jesus Christ, everyone will experience it.
Living peacefully while at the same time knowing the pang of death is just around the corner is possible. Doing what I did as a nine-year-old is the first step in facing the death pang: asking Jesus to forgive my sins and committing myself to be His follower. This act removes the condemnation I’m under and takes care of the sins I’m responsible for—all of which keep me out of heaven.
Knowing I’ll immediately enter heaven upon my death is also comforting. I won’t have to lie unconsciously in the ground until Christ returns. The apostle Paul said to be absent from the body was to be at home with the Lord. Jesus told the thief on the cross who begged for His forgiveness that he would be with Him in Paradise that day.
When you make things between you and God right, you no longer have to fear death’s pangs.


Prayer: Father, thank You for taking away the fear of death when we trust in You as our God.