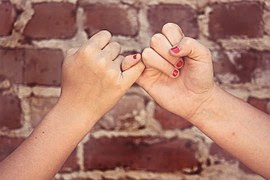 And Jonathan made David reaffirm his vow of friendship again, for Jonathan loved David as he loved himself. 1 Samuel 20:17 NLT
He made a promise to his best friend, but now his friend lay dead on a mountaintop.
Davey and Johnny were best buds and had been since they were young. Davey’s family farmed while Johnny’s came from the upper class. In spite of their cultural differences, Davey and Johnny managed to maintain their friendship.
Johnny’s dad, however, was leery of Davey. Though Davey came from the lower class, he saw potential in him—potential that might carry him far in life. So he gave him a job at his company—but with ulterior motives. He thought Davey’s sharp mind might help his company move forward.
As Johnny’s dad aged, he made arrangements for Johnny to take over the company after his retirement or death. Johnny had no interest in the company and secretly wanted Davey to run the business. He even made Davey promise to care for his family if something happened to him. (He seemed to have eerie premonitions.)
Johnny’s premonition materialized. He and his father were tragically killed while on the way to negotiate with a firm that was their staunchest competitor. Davey kept his promise, though, ran the business, and even cared for Johnny’s disabled son. He could have forgotten his promise and pursued his own interest in life, but he chose to honor his friend by keeping his word.
Being as good as my word is a high goal to reach for—but a worthy one. A person’s word was once enough…with perhaps a handshake to follow. Not anymore. Even though we live in an age of paperwork that protects me and the one I’m making a promise to, my word should be just as good as if there were no paperwork. My promises should not be made lightly.
Breaking a promise should never enter my mind. Only under extenuating circumstances and unusual conditions should I renege on my word. Carrying out my word is important even if inconveniences me. Taking care of Johnny’s disabled son certainly did Davey.
Perhaps more than anything else, keeping my promises provides an example of my faithfulness to God. When I’m serious about keeping my promises to God—as He is about keeping His to me, I’ll find it easier to keep my word to others.
When you give your word, keep your word.


Prayer: Father, help us understand how important it is to keep our word to others.