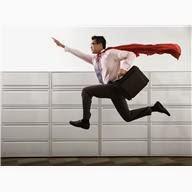 For he was faithful to God, who appointed him, just as Moses served faithfully when he was entrusted with God’s entire house. Hebrews 3:2 NLT

Some days it seemed she despised me; other days it appeared I was her favorite. Imagine my surprise when the boss called me into her office and said, “I’m giving you a promotion.” And not just any promotion but one that took me from just an ordinary office worker to supervisor. I worried about how others in the office who had done more time than I would welcome my new position. With the exception of a few bumps, the transition went well as I settled into my new position with its added responsibilities. I was accountable for more than I had been before, but there were days I wanted to return to my old position.

Jesus was greater than Moses but like Moses was faithful to the mission the Father sent him on. But Old Testament Moses was admirable as well and served God faithfully. From a small baby hidden in the bulrushes to escape a jealous king to the one who led more than a million people through a foreboding wilderness to the Promised Land, he served God with passion. He ruled over both complaisant and rebellious men and women but handled his promotion well—all things considered.

Promotions at my various places of employment were always nice. Yet, with more authority came more responsibility—which made the promotion somewhat of a mixed blessing. My best promotions, however, have come spiritually. Born a sinner with a horrendous future, I’ve now been promoted to a saint—not in practice but in position. Ironically, I’ve also been elevated to a servant rather than a ruler. In God’s kingdom, serving makes me greater than ruling. My promotion involved a new heart that would prompt me to love and serve others regardless of their race, gender, cultural background, or financial standing. And though I’m not there yet physically, I’m now spiritually seated in the heavenlies with Christ (Ephesians 2:6). My promotion to heaven from hell is a sure thing.

Are you enjoying the promotions God has given you?

Prayer: Thank You gracious God for making us something more than we ever could have attained in our own power.