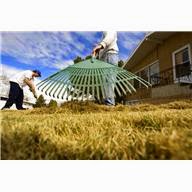 I stared it in the face, and it glared back. How had it gotten there? I had walked by the flower pot every day, but I hadn’t seen it. Had I spotted it when it was young, I could have eliminated it without damage to my flower. But now…it was dangly and gaudy. Perhaps that’s why I hadn’t noticed it previously. The flower and weed’s roots and leaves were intertwined. To remove it now would surely upset the flower’s root system. I had a choice: remove the weed or let it continue growing, hoping the flower would disguise its presence.

Jesus told a story of a landowner whose enemy planted weeds among his wheat—weeds he chose not to remove. On the one hand, God’s Word tells me Christ has made me holy. And I’m to separate myself from people and things that aren’t. On the other hand, Jesus says I’m salt and light to a world filled with people who are darkened by the weeds of sin’s influence. How can I do both?

To avoid entanglement by the weeds of sin, I must be grounded in what I believe—doctrine. Unless I have a firm grasp on this—an area that studies show many Christians are weak in, I can’t scale the hurdle of influencing without being influenced. And that hurdle can sometimes be quite pronounced. I must know God’s Word well enough to give a defense of what I believe and why.

Associating with the weeds doesn’t mean seeing how close I can come to being what they are. I don’t want to be a weed; I want others to become wheat. As more wheat grows, good will begin to overrule bad. Too much bad company can corrupt good moral standards.

Intermingling with the weeds without being intertwined with them requires a heaping spoonful of love. The measure of love God demonstrated by letting his Son die for the sins of the weeds. I can never forget I once was a weed myself.

How are you confronting the weeds?

Prayer: Almighty God, give us wisdom to love and battle the weeds so that through us You might change them into wheat.