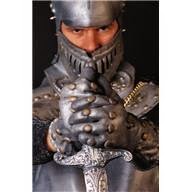 
Objective:
Children need to understand that when they choose to follow Christ that they will enter a battle just as David did with Goliath. The battle is between good and evil and between whether they will stand for God or keep quiet about their faith. God, however, gives Christians armor to wear so we can be successful in our fight against evil—our primary enemy being Satan.

Say:
(Display the following verse where the children can easily see it.) Let’s say our memory verse together. Put on all of God’s armor so that you will be able to stand firm against all strategies of the devil. (Ephesians 6:11 NLT)

Icebreaker Questions:
Can you define the word enemy? (Anyone who doesn’t like us and perhaps is even attempting to hurt us.)

Who do you think the enemy of God’s people is and why? (Satan. He hates God and wants to destroy God’s work in the world.)

What are some bad things Satan tempts people to do? (Examples might include: lying, stealing, cursing, murdering, drugs, bullying, disobeying parents, etc.)

Say:
Today we’re going to begin a month long study about the armor God gives his children. When we wear it properly, we can win the battle over Satan and his temptations.

Activity Time:
Have children color the Body Armor coloring sheet. This picture covers the various parts of the Christian’s armor we will study this month.

Bible Story Time:
Today we will introduce the armor by telling children why we need to wear it—we have an enemy:

Christians have many enemies, but they are all incited by Satan…the Devil. Long ago, Satan was one of God’s angels. His name was Lucifer. One day Lucifer decided he didn’t want to follow God anymore. In fact, he wanted to be God. So he led a rebellion against God. Many of God’s angels decided to follow him also. These angels we call evil spirits or demons. They, along with Satan, are enemies of Christians. Another Bible verse that talks about our enemy is found in I Peter 5:8; Stay alert! Watch out for your great enemy, the devil. He prowls around like a roaring lion, looking for someone to devour.

Reflection: Why do you think Satan wants us to disobey God and also destroy our work for God? (He doesn’t love God and doesn’t want us to either. He knows that in the end God is going to win the battle between good and evil, but he wants as many people on his side as possible. He also wants to trip up Christians and make them disobey God.)

We can’t see the Devil or his evil angels—just like we can’t see God or the good angels, but they are just as real as God and his angels are.

Reflection: How can we know the Devil and his angels are real even though we can’t see them? (By the actions of people and by the fact that we are tempted to do wrong.) Describe some pictures you have seen that show what people think the Devil looks like? Do you think he really looks this way?

When the men and women in our military are fighting enemies of our country, they can often see who they are fighting. Or at least see the area from which missiles or bullets are being fired. Since they can see them, they know what area to shoot their bullets and missiles into. When David fought Goliath, he could see and hear him.

In our Bible verses, Paul says Christians are not fighting an enemy with flesh and blood. He’s not human as we are. We can’t see him, touch him, or hear him, but we know he’s there because God tells us he is and because we can see the bad things he makes people do. If you have decided to obey Jesus, Satan and his demons will try anything possible to get you to disobey God. If we don’t put on the armor we’re going to study this month, we’ll never be successful in obeying God.

Reflection: Who are some other enemies we might face other than Satan and his evil spirits? (People who follow him.)

Satan uses other people to tempt us to do or say things that will make God sad.

Reflection: What are some things your friends or school mates might tempt you to do that would displease God? What are some methods you use to overcome temptation?

Supernatural power is needed to defeat Satan and his demons. The armor we’re going to study helps us do just that. Saul tried giving young David his armor to fight Goliath with, but it was too large. God’s armor is sized just right for each Christian. We simply have to put it on, and then we’ll be victorious in our battle against sin and evil.

Activity Time:
(Let children act out the following hypothetical scenarios and tell how they would react.)

Friend to them: “If your mom or dad won’t buy you what you are asking for, just throw a temper tantrum until they do.” (Temptation: disobey parents)

Classmate: “I didn’t do my homework. Can I copy yours?” (Temptation: cheating)

Classmate: “Can I look on your paper during the test. I forgot to study.” (Temptation: cheating)

Yourself: “Mom and Dad give my sister/brother more attention than they do me. They must love them more.” (Temptation: jealousy)

Yourself: “I want to sit at the front of the class. I don’t care if ____ can’t see as well as I can.” (Temptation: selfishness)

Transition:
Let’s sing our song about our fight against evil.

Song:
I'm in the Lord's Army
(To the tune of The Old Gray Mare.)

I may never march in the infantry
Ride in the cavalry
Shoot the artillery
I may never fly o'er the enemy
But I'm in the Lord's army!
Yes Sir!

I may never march in the infantry
Ride in the cavalry
Shoot the artillery
I may never fly o'er the enemy
But I'm in the Lord's army!
Yes sir!

Take Away:
Let each child tell one thing they learned about our enemy the Devil.

Enter to win a free copy of my newest book, Grits & Grace & God. Visit the following link and sign up: https://www.goodreads.com/giveaway/show/99040-grace-grits-god-manna-from-heaven-served-up-southern-style
at July 01, 2013