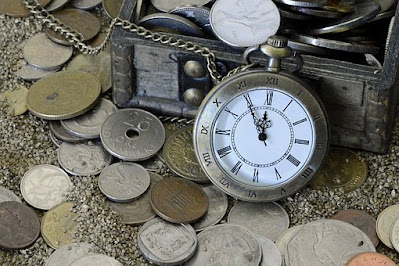 The Kingdom of Heaven is like a treasure that a man discovered hidden in a field. In his excitement, he hid it again and sold everything he owned to get enough money to buy the field. Matthew 13:44 NLT

“Come see what I found.”

My cousin possessed a great imagination. He had to. He lived in the country in a time before technological advances had produced games and other things that now keep children indoors for hours on end. He had already discovered rolls of player piano music stuffed in boxes in my grandmother’s dusty attic—a place we rarely traversed because of the rickety stairway leading up to it.

Now, he was telling me to come and see something else he’d discovered. As our grandmother busied herself with cooking, we sneaked to the “front room,” a room she really didn’t like us to visit. We were mischievous boys always looking for devilment—and she knew it.

Quietly, my cousin lifted the top of the old converted player piano and showed me a quart-sized Mason jar resting on top of the piano guts. I asked what it was. Instead of telling me, he carefully removed the jar, unscrewed the top, and took out the handkerchief that my grandmother had stuffed inside.

As he gently unrolled the handkerchief, my eyes bulged, and my heart pounded. Inside were twenties, tens, and fives. Money, we later discovered, our grandmother had saved from selling fish to the neighbors. She was an avid fisherman, but she rarely cooked them for her family.

My grandmother possessed a treasure only she knew about—or so she thought. Jesus also told a story about a treasure. Whatever the treasure was, a man discovered it hidden in a field. Keeping his find a secret, he sold everything he had and bought the field—and unknowing to who owned the field, the treasure in it.

Jesus compares the treasure to the Kingdom of Heaven, and by that, He means salvation—the treasure we inherit when we recognize our sinfulness and run to the Savior who has drawn us to Himself by the power of His Spirit. When we ask, God removes the barrier separating us from Him and welcomes us into His family where we can enjoy the happiness of finding that treasure so many don’t find.

But God doesn’t want us to keep His treasure to ourselves. The man who purchased the field did. My grandmother did. My cousin and I did. God wants us to share our wealth. Jesus’ sacrifice on the cross was enough to forgive the sins of all of humanity. And God wants everyone to enjoy His treasure.

Jesus once said we should be willing to give up everything for this precious treasure He offers. Whatever keeps us from enjoying it isn’t worth our time and effort.

Have you discovered life’s greatest treasure? If so, tell someone about it.

Prayer: Father, give us opportunities to tell others about the treasure we’ve found.