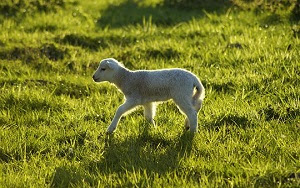 Things appeared bleak, but my daughter saw them in a different light.

“You know what I’ve said about that black cloud that hangs over me,” I said as we plodded along a trail, flooded by a river of water from a recent storm.

“Now, Dad.” I knew I was in for a lecture. My daughter, always the optimist, had her speech ready.

“We dodged storms for a long period of time. We made it to the summit of the mountain and saw 360-degree views for ten minutes before the storms rolled in. God gave us a porta potty to stand in to protect us from the lightning and hail. And even though the souls fell off your boots, you still have shoes to wear.”

Of course, she was right. I sometimes look at the negative side of things rather than the positive side. Probably due to the home atmosphere I grew up in where my parents tended to do the same.

“You’re right,” I confessed. She had restored my soul, my attitude changed, and the remainder of the hike took on a new perspective.

The psalmist said God did the same for him. As a shepherd, warrior, fugitive, king, and sinner, David experienced many times when God lifted his spirit.

Defined, the soul is our mind, will, and emotions. But it is more. It is that part of our makeup that survives death and lives on until it is later reunited with our resurrected bodies. All of us, like David, need a little soul restoration from time to time.

The ultimate soul restorer is God. No person or pleasant circumstance can do what He can for us when our spirits need resurrection. Going to Him in prayer and reading His Word gives Him the opportunity to infuse life and optimism into our troubled souls.

But God also uses other people—as He did my daughter—to lift our spirits. Rather than casting more pessimism on those facing difficult times, we can speak words of encouragement to brighten their days. We might also have the ability to give them the direction they need to get them out of their negative circumstances.

Soul restoration ultimately comes through God, but He often uses us as His instruments.

Don’t neglect the privilege to lift someone else’s spirits.

Prayer: Father, may we be soul restorers.

Tweetable: Are you a soul restorer?