Chaos on the Field - Martin Wiles 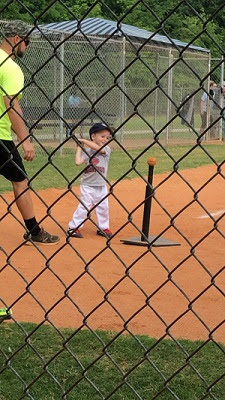 I have told you all this so that you may have peace in me. Here on earth you will have many trials and sorrows. But take heart, because I have overcome the world. John 16:33 NLT

Only one word could describe what I witnessed. Well … perhaps two or three.

My daughter’s three-year-old decided he wanted to play T-ball. I knew the game since my son had played at this age.

My wife and I headed out one Saturday morning for our grandson’s first scrimmage. His older brother played on a nearby playground, having had no interest in playing T-ball or watching his brother. Both teams gathered at a far corner of the field for team pictures. Then, the coaches herded them across the field and to their respective dugouts. Of course, most of the boys had no idea what a dugout was, so the coach had to point the way.

Once both teams had gathered up, our grandson’s coaches brought the team onto the field and lined them up across the infield. The other team batted first. That’s when the one word came to mind: chaos. When the batter hit the ball, only two little boys—my grandson not one of them—went after it, picked it up, and tried to outrun the batter to first base. Our grandson looked on and smiled at those who did what they were supposed to do. He had a good time standing there with glove on hand. One other little tike played in the red clay.

When my grandson’s team batted, things changed little. Our grandson hit the ball, but the coach had to tell him to run to first base—and later, second, third, and home. He liked looking back at the coach instead of in the direction he was running. Some headed for third base after hitting the ball, and others ran home after tagging second base. But chaos on the field brought a good laugh from everyone in the stands.

Sometimes, when I look at world events, the world doesn’t appear much different than my grandson’s T-ball game: chaotic. Evil abounds. People ignore orders. Many don’t seem to know … or care where they are headed. Some take shortcuts. Others do their own thing.

My faith helps me remember that appearances are sometimes deceptive. God is a God of order and peace, and behind the scenes of the apparent chaos He is working to carry out His plan. Troubles happen—in the world and in our lives—but God works them all out for our good and His glory. Order does exist among the apparent disorder.

When things seem out of control—taking your peace in the process—trust the One who orders it all and who can give you peace.

Prayer: Father, we thank You for the peace You give in the midst of life’s turmoil.

Tweetable: Does your life seem chaotic?