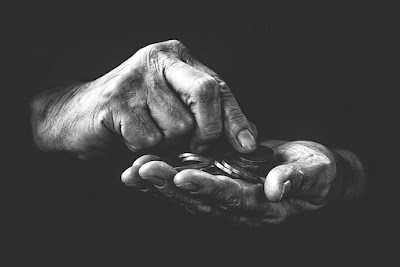 You may freely eat the fruit of every tree in the garden. Genesis 2:16 NLT

Once again, we robbed Peter to pay Paul.

I was familiar with the saying. I had heard my paternal grandfather use it many times when referring to the difficult financial times he and my grandmother faced when they first married.

The meaning was simple. If he needed money immediately, he borrowed money saved for a bill due later in the month. When that bill came due, he would use money designated for another bill.

My wife and I were also familiar with the adage. We’d been doing it for most of our married life. We didn’t live beyond our means—or high on our horses—but my jobs often didn’t pay enough to pay our bills and have enough left over for emergencies. When one arose, we robbed Peter for Paul’s sake. My wife became an expert at finagling money.

One recent robbery occurred when one of my wife’s back teeth chipped, causing her increasing pain. Her dentist appointment was weeks away, but we knew ahead of time how much our co-pay would be. The trouble was, we had nothing to save for it. We prayed. Nothing happened. We attempted to sell items on Facebook and eBay. Nothing. We even scanned our belongings to see if we could pawn something. We found nothing of value.

Two days prior to her visit, we still didn’t have the money. We prayed harder. “Lord,” I said, “my wife is in pain. You know this isn’t a want; it’s a need. We’re going to do what we can, but we’re leaning on You and resting on Your promises.”

The night before her appointment, we still didn’t have the money—until an unexpected check came in for a bill due later in the month. So we did what we do best: robbed Peter to pay Paul.

Did God fail us? Some might think so, but we didn’t. The money came—although not in the form we had hoped for. We prayed and depended on God as He told us to, and we worked diligently to do our part.

God didn’t fail us—as He didn’t Adam and Eve. When God placed them in the Garden of Eden, He gave them everything they needed to survive and do His work. He does the same for us.

Whatever your need, God will supply it—even if means you have to rob Peter to pay Paul.

Prayer: Father, we trust You for every need we have.

Tweetable: Are you trusting God or managing your own affairs?