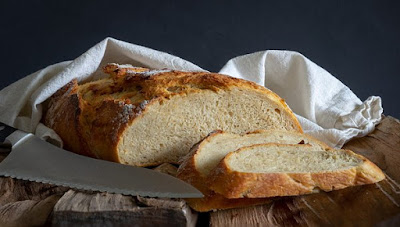 On the night when he was betrayed, the Lord Jesus took some bread and gave thanks to God for it. Then he broke it in pieces and said, “This is my body, which is given for you. Do this in remembrance of me.” In the same way, he took the cup of wine after supper, saying, “This cup is the new covenant between God and his people. 1 Corinthians 11:23-25 NLT

After seeing the bread, I couldn’t help but wonder about the juice.

At the first church I pastored, the chairman of deacons carried the responsibility of preparing the elements for the Lord’s Supper. Being a conservative sort of chap, he always bought a large pack of crackers and a deluxe size grape juice. Since he demonstrated faithfulness to his duties, I never worried about things being ready and in order.

We had a small congregation and hardly made a dent was made in the elements. When the chairman finished preparing the crackers and juice, he returned them to a dark cabinet. On the ninth month of the year—we only observed Communion once a quarter—the chairman pulled out the same box of crackers and the same bottle of juice.

I stood before the congregation, waiting on the deacons to pass out the elements to the congregants. When they returned with the crackers, I looked down to pick up my cracker, say a Bible verse, and invite the members to eat with me as we remembered the broken body of Christ. As I reached for my cracker, I saw a maggot crawling around in the plate. What was I to do? I carefully selected a cracker far away from the varmint and continued with the service. The crackers were stale.

Next came partaking of the juice. I wondered what we were in store for. The deacons passed it out and returned the remaining cups to the table. I reached down, picked up mine, said a Bible verse, and invited the members to drink as we remembered the blood Jesus shed for us. Coughs reverberated throughout the congregation. Obviously, I had no wine drinkers among my members, for the juice had almost fermented.

My chairman and I had a talk after this experience. No more using of leftover bread and juice unless it had been refrigerated. And he was to buy smaller quantities. We laughed about it—as did everyone else I told—but a lesson emerged.

Our experience was distasteful, but so was Jesus’. Soldiers battered and bruised His body, out of hate and misunderstanding of who He was. He endured for us. When we received the crackers, we remember that. The blood He shed was for our sins. He embodied the perfect sacrifice. The juice reminds of that.

Next time you partake of the Lord’s Supper, remember the elements represent what Jesus did for you.

Tweetable: What emotions does Jesus' crucifixion create in you?

Prayer: Father, thank You for sending Your Son to do for us what we could not do for ourselves.