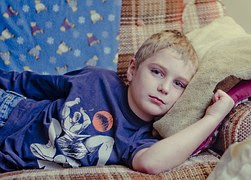 Then at your command, O Lord, at the blast of your breath, the bottom of the sea could be seen, and the foundations of the earth were laid bare. Psalm 18:15 NLT
Jan could see herself healed, but she had no proof she was.
For more than a year, Jan had suffered from a hacking cough and congestion. Her initial doctor visits resulted in a diagnosis of bronchitis for which she was prescribed antibiotics. Somewhere along the way, her bronchitis cleared up, but the coughing and shortness of breath didn’t. So her family doctor referred her to a pulmonologist who diagnosed her with asthma.
After a year of coughing, Jan is tired—physically and emotionally. She rarely attends church because she is afraid her coughing will disrupt the service. Her energy level makes going to the grocery store or getting together with friends almost impossible. She is confined and discouraged.
I called to check on Jan recently. Carrying on a conversation with her is almost impossible because of her coughing. She apologized; I told her I understood. She told me she wanted to come to church; I assured her the church understood. Then she said, “But I still believe God can heal me.” She still saw life with faith eyes.
David did as well. God hadn’t defeated his enemies yet, but he believed He would. He could see what the earth and sea would look like after the battle was over—the battle that hadn’t taken place yet.
Seeing with faith eyes lets me see God’s forgiveness. I have no tangible proof my sins are forgiven and cast into God’s sea of forgetfulness, but I believe they are.
Seeing with faith eyes gives me a glimpse of eternity—even though I’ve never been given a sneak preview. All I have is the picture God’s Word paints, but I stake my life on the belief it exists.
Seeing with faith eyes helps me believe God has a plan for my life. I don’t always understand it or see how He is working it out—but I believe He is. He tells me I’m His masterpiece, and that I have potential to be used in His Kingdom agenda.
Seeing with faith eyes also helps me remember the ill effects of sinful behavior, thoughts, and attitudes. Although I can’t handle sin, I can be handled by it. God says sin violates His standards, and I choose to accept His word.
There’s more to life than what you can physically see. Let God help you live with faith eyes.


Prayer: Father, remind us that we walk by faith—not by sight--and that our faith will be rewarded.