Walking into the Holy - Martin Wiles 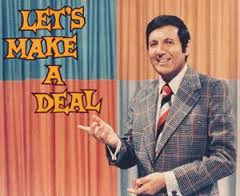 Then there was a curtain, and behind the curtain was the second room called the Most Holy Place. Hebrews 9:3 NLT

Before the contestants were three doors—or actually curtains: Door #1, Door #2, and Door #3. Which one to choose was the gamble.

Monty Hall co-created and co-produced the original television show Let’s Make a Deal. Contestants played various games and were offered chances to trade their winnings for the possibility of something more valuable.

The Big Deal came at the end of each show, and the top winners were offered the chance to trade their prizes for what was behind one of the doors. Those who took the chance could possibly win the Big Deal of the day, which might be a car, boat, vacation, furniture, appliances, or any combination thereof. After the curtains opened, some were pleased with their choice while others wished they had kept their original winnings.

In the tabernacle God instructed Moses to construct after the Israelites left Egyptian slavery, there were two rooms: the Holy Place and the Most Holy Place. A curtain separated the rooms. Ordinary priests were allowed in the first, but only the high priest could enter the second—and that only once each year.

In this sacred room was the Ark of the Covenant, which represented the presence of God. On this sacred day, the high priest confessed the sins of the people and begged for God’s forgiveness.

Happily no doors or curtains presently separate me from God. The curtain of the temple was torn from top to bottom when Jesus died on the cross. My sin debt was paid, thereby removing the barrier between me and God.

Now I—along with all other believers, am a priest in my own right. God gives me the privilege and loving invitation to enter boldly and confidently into his presence as often as I desire. His guidance, love, and listening ear are available regardless of the time or my location.

Nothing separates me from his love unless I voluntarily—or rebelliously, erect it. How often are you walking into the holy?

Prayer: Father, thank You for making it possible for us to enter Your presence at any time and any place.
(Photo courtesy of letsmakeadeal.com)

Help us spread God's encouragement through his love lines. Share this devotion with a friend.
at June 29, 2015