God is with Us: When There Is Conflict - Martin Wiles 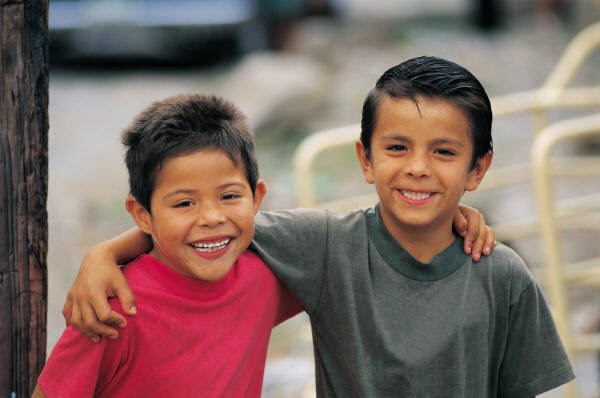 Theme: God is with Us: When There Is Conflict
Scripture Reference: Genesis 25:19-28:22
Memory Verse: Genesis 28:15
(Compiled and written by Martin W. Wiles)

Objective:
For the next two months, children will explore the theme: God Is with Us. Each week, a familiar story from the Old Testament will be studied and a particular lesson examined. This week, children will learn how God is with them even when there is conflict between them and someone else.

Say:
(Display the following verse where the children can easily see it.) Let’s say our memory verse together. I am with you, and I will protect you wherever you go. Genesis 28:15 NLT

Icebreaker Questions:
What do you think the word conflict means?

Have you ever had a conflict with someone at home or school? (Let children tell their stories.)

Do you think Jesus ever had conflict with other people? (He often had run-ins with the religious authorities who were teaching the people wrong things about what God’s Word said.)

Say:
For the next two months, we will talk about the theme “God Is with Us.” We will learn eight different stories from the Old Testament—some of which you might already know, that will show us different occasions when we can be assured God is with us. Jesus promises never to leave or forsake his followers, and these stories will teach us how God didn’t with men and women who lived a long time ago.

Reflection: How many of you have brothers or sisters? Do you always get along? Tell about one time when you disagreed about something.

Isaac and Rebekah were very sad. They had been married for a while, but no matter how hard they tried, Rebekah couldn’t get pregnant. Isaac prayed diligently to God, asking him to please give them a son to carry on the family name. Then one day, the Lord answered his prayer. In fact, he answered it with more than Isaac ever expected. Not only did Rebekah get pregnant, she was pregnant with two children—both boys. The first to be born they named Esau. He was covered with red hair. Soon after, his twin brother was born. They named him Jacob. Jacob’s name meant “he who grasps the heel.” Isaac named him this because he was grabbing his brother’s heel when he was born.

Reflection: If you have a brother or sister, are you exactly alike? What are some ways you are different? Do you think Jacob and Esau were exactly alike just because they were twins?

Jacob and Esau were twins, but they were very different. Esau was an outdoorsman like his father Isaac. He loved to hunt and then prepare special wild game meals for his father. Jacob, on the other hand, was somewhat of a momma’s boy. He liked to stay indoors and close to home.

One day, Jacob was cooking some stew. Esau came in from hunting, tired and exhausted. When he smelled some of the delicious stew his brother was cooking, he asked him for a bowl. Jacob wasn’t always the kind of brother he should have been. God had told Rebekah that the boys in her womb would represent two nations of people and that the descendants of the older brother would serve the descendants of the younger brother. She probably told Jacob—her favorite—about what God had told her because when Esau asked for some of the stew Jacob said he would only give him a bowl if he gave him his birthright in return.

Reflection: Can you see a conflict brewing in this story already? Does anyone know what happened next?

A birthright was a very special honor given to the oldest son, and Esau was the oldest. Having the birthright meant the child would receive a double portion of the family inheritance when the father died and would also have the  honor of one day becoming the leader of the family. The oldest son could give away or sell his birthright if he wanted to, but if he chose to he would lose material possessions and family leadership.

Esau chose to give his away. When Jacob told him he wouldn’t give him any stew unless he gave him his birthright, Esau said, “Look, I’m dying of starvation. What good is my birthright to me now?” And he gave it to Jacob. The fact that Esau so easily gave away his birthright shows he didn’t have much concern about godly things. Esau was worried about right then and not thinking about his future.

Later, when Jacob and Esau’s dad was about to die, he told Esau to go kill some wild game and prepare it just the way he liked. Remember Esau was his favorite, and Jacob was his mother’s favorite.

Reflection: If you have a brother or sister, do you ever feel like your parents treat them more special than they do you? How does that make you feel? How do you respond when you feel that way?

Jacob already had the birthright, but his mother wanted him to have the father’s final blessing too. The blessing was the parent’s prediction of what would happen to the child in the future. It, too, was a special honor to receive this. Rebekah wanted Jacob to get it, so she had him dress up like his brother and she cooked a meal the way Esau did. When everything was ready—while Esau was still out hunting, Jacob took the meal to his father, pretending to be his brother. Sure enough, he tricked his father, and his father gave him the family blessing reserved for the oldest child.

Reflection: When Esau returned and discovered what his brother had done, how do you think he reacted? How would you have reacted?

When Esau discovered that his brother had tricked his father into giving him the family blessing—in addition to already having the birthright, he was furious. He swore he would kill his brother. When Jacob’s mother heard about this, she sent him away to another land to live with her brother and his uncle. On the way there, Jacob had a dream about a ladder extending up to heaven. In this dream, God promised to be with him. It wasn’t until many years later that Jacob and his brother were reconciled.

Reflection: How might things have been different had Jacob not tricked and stolen from his brother?

Life is full of conflicts. If you haven’t had any yet, you will have many in your future. You may have conflicts with your parents, grandparents, teachers, principals, friends, school peers, brothers, and sisters. When you grow up and go to work, you may even have conflicts with those you work with or for.

Jesus wants us to love our friends and enemies. When we have conflicts, we need to pray for those we are in disagreement with. Regardless of who started the conflict, we should also be willing to forgive. If we started it, we should apologize. When we love others as Jesus wants us to, we will attempt to avoid conflicts and also be quick to solve them when we have them. We can also ask God to help us see the best in people rather than the worst. Some of our conflicts are difficult to solve. Jacob and Esau’s were. Just as God promised Jacob he would be with him as he went to this foreign country and left his family, so God will be us when we are experiencing times of conflict as well.


That's Me!
Kids tend to view friends as those who have similar interests, so it can help build friendships when you play a game that shows children ways they are the same. To play this game, gather a group of children together and have them sit down. One kid will begin the game by calling out a statement about himself, such as "I like to ride my bike," or "I have a younger brother." If the statement is true for any of the other children, they should stand up and say, "That's me!" This game gets children on their feet and is an easy way for the kids to see the similarities in others.

The More We Get Together

Wrap Up:
Let each child tell one thing they learned about the conflict from the story of Jacob and Esau.