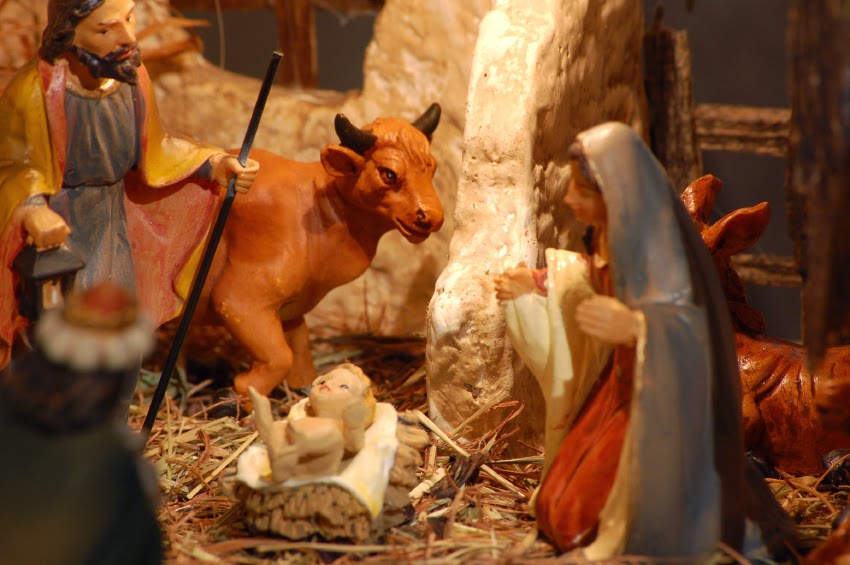 Say:
(Display the following verse where the children can easily see it.) Let’s say our memory verse together. She gave birth to her first child, a son. She wrapped him snugly in strips of cloth and laid him in a manger. Luke 2:6-7 NLT

Icebreaker Questions:
How would you feel if you were on vacation in a strange town and couldn’t find anywhere to spend the night?

How would you feel about asking a complete stranger to help you?

Does obeying God make us different from those who don’t follow Jesus?

Say:
Celebrating the birth of Jesus—which is the main reason for celebrating Christmas—will be our theme during the month of December. Today we will talk about the birth of the baby Jesus.
Bible Story Time:
The Roman Empire was ruling when Jesus was born. Though they were the rulers, they allowed the Jewish people to do pretty much what they wanted as long as they didn’t cause trouble. Emperor Caesar Augustus was the first emperor. Just before the birth of Jesus, the emperor declared a census. Perhaps they were looking for people to serve in Rome’s military, or it may have been to tax people. While the Jewish people didn’t have to serve in the military, they did have to pay taxes.

Reflection: How do you feel when someone makes you do something and you don’t have any choice but to obey? Name some places this happen? Does God make us obey him?

Every person had to return to their hometown to register for the census. Since Joseph was a descendant of King David, he had to return to Bethlehem. Mary was very pregnant with the baby Jesus by this time, so this was a very difficult journey for her. If we get in our car today, we can travel 70 miles on the interstate in less than an hour. Mary and Joseph were walking. Mary perhaps was riding a donkey. Either way, imagine being pregnant and having to walk that far. Or bounce around on a donkey for that distance. But they went because they had no choice.

Reflection: Can doing what others force us to do often be unpleasant? Such as when teachers give homework, projects, and tests. Or coaches make us work hard?

Bethlehem wasn’t a large place, and hundreds of extra people were there along with Mary and Joseph because of the census. Mary and Joseph must have arrived later than most because when they tried to find lodging they couldn’t. “No Vacancy” signs hung every where they looked. Those who were allowing family and strangers to share their homes were filled up. Every door they knocked on, they received the same message, “We have no room.”

Reflection: Have you ever felt rejected by your friends? Family? Teachers? How does it make you feel? What did you do?

Finally, one person—after telling them he had no room—offered them a stable, probably a cave. Here in a dark cave where animals were corralled, Mary gave birth to the baby Jesus. She laid him in a manger which was a feeding trough for animals. Mary wrapped the baby Jesus in strips of cloth. This kept him warm and provided a sense of safety. Some even thought they helped protect their internal organs. There were no electric lights in Jesus’ day, so the cave would have been dark, damp, and smelly. Not ideal conditions to birth a child.

The Old Testament had foretold that the Messiah or Christ would be a descendant of King David. One prophet had even foretold the town where the Messiah would be born. Many Jews, however, were looking for a Messiah to be born in kingly surroundings. He might even appear suddenly and not as a baby. Either way, he was going to conquer whoever ruled them at the time. This wasn’t God’s plan. He wanted his Son to be born in very simple surroundings. He would conquer, but not enemies. He would conquer sin by dying on the cross.

Reflection: Have you ever had something happen in a completely different way than you expected?

The good news is that Jesus didn’t stay a baby. He grew up just as ordinary children do. When he was thirty years old, he began preaching and teaching people about himself. He was God’s Son and the world’s Savior. Those who believe in him would have forgiveness and eternal life. Three years later, he went to the cross and died for our sins.

Activity Time:
Have children color the picture of Mary and Joseph.

O little town of Bethlehem,
How still we see thee lie!
Above thy deep and dreamless sleep
The silent stars go by.
Yet in thy dark streets shineth
The everlasting Light;
The hopes and fears of all the years
Are met in thee to-night.

O morning stars, together
Proclaim the holy birth!
And praises sing to God the King,
And peace to men on earth.
For Christ is born of Mary
And gathered all above,
While mortals sleep the angels keep
Their watch of wondering love.

Craft Instructions:
• Color or paint the template pieces.
• Cut out the template pieces (may require adult assistance, but they're pretty quick to cut out).
• Glue the face onto the tree.  The two "swoopy" things are eyebrows.  The ornament is the nose.
• You can add the child's name and the year onto the back.
• You can glue this craft onto large butcher paper or plain wrapping paper to make personalized gift wrap or onto the front of a large piece of construction paper to make a card.

Wrap Up:
Let each child tell one thing they learned about the birth of baby Jesus.