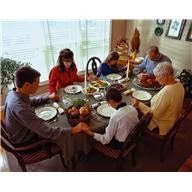 
Objective:
Being a follower of Christ entails celebration. Fall is a season of celebration. In years past, farmers, their families, and entire communities celebrated the ingathering of the crops and thanked God for the bountiful harvest. During the month of November, we will focus on thanksgiving and celebration.

Say:
(Display the following verse where the children can easily see it.) Let’s say our memory verse together. Be thankful in all circumstances, for this is God’s will for you who belong to Christ Jesus. I Thessalonians 5:18 NLT

Icebreaker Questions:
What major holiday do we celebrate during the month of November? (Thanksgiving)

Why do you think Thanksgiving was connected to this time of year? (This is the time of year when the crops came in.)

What other type of celebrations do you hear about during the fall season? (Town festivals, fairs, harvest festivals) What do people do at these events and festivals?

• Have children stand in a circle
• While passing a handkerchief from child to child, have everyone recite this poem:

Thankerchief, thankerchief, round you go…
Where you’ll stop, nobody knows.
But when you do, someone must say,
What they are thankful for this day.

Say:
Thanking God and celebrating his goodness will be our theme during the month of November. Today we will look at one of the festivals God told the nation of Israel to celebrate during the harvest season.
Bible Story Time:
Today we will study one of Israel’s feasts which was and is variously called the Festival of the Final Harvest, the Feast of Booths, or the Feast of Tabernacles.

The Feast of the Final Harvest was a seven day festival commemorating Israel’s 40-year-long journey through the wilderness. God’s people once spent 400 years as slaves to the Egyptians. When God delivered them, they had to travel through the wilderness to get to the Promised Land. After sending spies into the land so they could in turn make a plan of attack, Moses—their leader, received a very discouraging report. The cities were walled, and the people were powerful. Yes, it was a beautiful land, but they were not strong enough to conquer it. Because the people didn’t trust God to help them conquer the land, they were forced to wander in the wilderness for 40 years until all the generation of those who doubted God died. During this time, they lived in portable shelters or tents. Wherever they camped, they set up tents.

Reflection: Can you imagine living in a tent for 40 years? How would life be different for you in a tent?

During this 40-year journey in the wilderness, God provided for his people. Their clothes and shoes didn’t wear out. He provided water from various places. He sent quail into the camp so they’d have meat. He also provided manna for them to eat. Manna was small cakes that formed on the ground after the morning dew dissipated. Even though his people were disobedient to him, he was faithful to them.

Reflection: Can you think of some ways God takes care of you? Does God still love you even when you disobey him? What does God expect us to do when we disobey?
The Feast of Tabernacles is the nation of Israel’s counterpart of America’s Thanksgiving. This feast celebrates the ingathering of wine and grain just as North America’s Thanksgiving celebrates God’s provision for the early Pilgrims of our country whose first winter was brutal.

In Jesus’ day, two important ceremonies took place during this celebration. The people would carry torches around the Temple illuminating the walls as a symbol that God would be a light to those who didn’t know him. A second action was when the priest drew water from the pool of Siloam and poured it into a basin by the altar in the Temple. Then he would call on God to supply the needed rain. Jesus attended this festival and then told people he was the living water that would quench their thirst. He was also the light of the world.

Reflection: Does your family have any traditions they celebrate during November or Thanksgiving? Why do you think they do this?

Two practices associated with the feast were prayer and the reading of God’s Word. These are important practices for God’s children. Our prayers can express our thanksgiving to God for all he has done for us in the past, is doing for us in the present, and will do for us in the future.

Reflection: Should prayer and God’s Word be associated with our Thanksgiving season? Is it? What can we do to make sure it is?

Activity Time:
Have children draw the details and then color the picture of the Pilgrim girl. Also let them complete the Thanksgiving Word Search.

Help us spread God's encouragement through his love lines. Share this site with a friend.
at October 01, 2013