Standing My Ground by Jeff Wiles 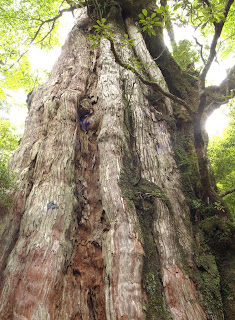 In Smoky Mountain folklore, Robert “Boogerman” Palmer is legendary. He even has a trail named after him—“The Boogerman Trail.” What distinguishes the trail from others in the park are the trees—particularly their size.

Boogerman never allowed his trees to be harvested. While his neighbors surrendered to the lucrative offers of the forest companies, Boogerman resisted. And because of his convictions, a remote trail now exists that leads through forests with ancient and massive trees.

I sometimes wonder if I defend my convictions as vigorously as Robert Palmer did, or do I give in too often and allow others to cut down my trees—not actual trees, of course, but the morals and beliefs that are the foundation of Christianity.
In Psalms, we’re commanded to preserve the commandments of God and teach them to the next generation. We will not hide these truths from our children; we will tell the next generation (78:4 NLT).

Surrendering to the pressures of society is so easy. So what if I work on Sunday? Or live together without getting married? And what does it matter if I have an enormous load of debt? Little by little, the trees come down.

I’ve determined I won’t allow society to define what’s right or wrong. God already has. For me, adultery, homosexuality, greed, lust, deceit, and slander are examples of immoral behaviors according to God’s Word. Whether society accepts them or not is immaterial. God doesn’t—even though he loves the person. But if I fail to teach my children what the Bible says about these and other sinful behaviors, they’ll grow up never understanding the dangers and enter into a society void of morality.

Reflection: Maybe it’s about time for believers to start telling society what the Boogerman told the forest companies: “You ain’t cutting down my trees.”
(Editor’s Note: Opinions expressed by guest writers are not necessarily those held by the owners of this website.)

Help spread the encouragement by sharing this site with a friend.
at August 16, 2013

Email ThisBlogThis!Share to TwitterShare to FacebookShare to Pinterest
Labels: priorities