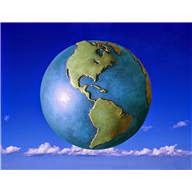 
Objectives:
The lesson objective is to help children understand that God has created everything they see and can’t see. Children attending public schools will be introduced to the theory of evolution and will doubtlessly not hear creation taught as another option for how the world began. Teachers should introduce God as the source of creation without instilling a negative spirit within the children toward their teachers or others who might adhere to an evolutionary viewpoint. Rather, children should be given the knowledge needed to present just as strong of a case for creation as for evolution. Make sure children understand that they should give their beliefs and viewpoints with love not anger or hate.

Icebreaker Questions:
What if our entire planet was covered in water? Would people be able to live on a planet such as that? How would their lives be different? (The children should be able to use their imaginations well at this point to give answers.)

What dangers might be present if we lived on a planet covered with water? (If the children give answers such as sharks, whales, etc., remind them that at this point God hasn’t created sea life.)

Do you think you would enjoy living on a planet covered in water and that was also dark?

Say: Today we’re going to continue a month long story about how God created the world and made animals and humans. The story you hear will likely be different from the one you’re taught in school in your science classes. They will teach you about a concept called evolution which means that life forms developed from other life forms. You may hear that at one time humans were monkeys but that over time we developed into what we are today. You will hear the same about animals. You will also hear your teachers teach that the world is billions of years old rather than thousands of years old.

Say: (Display the following verse where the children can easily see it.) Let’s say our memory verse together. This will be our memory verse for the entire month. In the beginning God created the heavens and the earth. (Genesis 1:1 NLT)

Bible Story Time:
Tell children about the third and fourth day of creation:

Can you imagine a time when there was nothing but God and heaven—wherever that was? No animals, plant, trees, or people other than the angels in heaven and the animals and plants that might have been there. God loves, and he wanted to share his life with more than just animals, plants, and angels. He decided to create a beautiful world and fill it with animal life, plant life, and people. He wanted these people to worship him and love him in return. Last week we looked at how it began, but what happened next?

After God created the earth, it was covered with darkness and water. There was no land, and there were no lights. No sun, moon, stars, or other planets. Just complete darkness.

Reflection: Have any of you ever been to an underground cavern? Usually on these trips, the tour guide will tell everyone to stand still. When everyone is completely still, he or she will turn out the lights. The darkness is so complete that you can’t see your hand in front of your face. Living in complete darkness for a short period of time will cause a person to go blind.

If God was going to be able to put what he wanted on his earth, he had to create light and land. So on the third day of creation, God gathered the waters into various places. This allowed areas of dry land to appear. People, animals, and plants would live on this dry land. Even though most of our earth is covered with water, there is enough land for billions of people to live on.

Once land appeared, God created plants that would grow and fill the earth. No animals had been created yet…or humans. Both would need these plants for food. God looked at what he had accomplished so far and said it was good. Nothing God makes is ever bad.

Reflection: Do you see how God is organizing his creation? When we buy things that must be put together, directions are included. This is because with most things there is a certain order that must be followed. Otherwise, the object won’t work properly.

Then there was the fourth day. If the plants were going to grow, they needed light. So God created two great lights, one to rule the day and the other to rule the night. Can you name these two great lights? (Sun and moon) God also made the stars to give light at night. Long years ago, people would use certain stars for directional arrows when they traveled by land and sea.

Reflection: What do you think would happen to a plant that never received any light or water? (To illustrate the importance of light and water, teacher should bring a small plant to the classroom and cover it completely so it receives no light or water. Tell the children that they will look at that plant each week to see how having no light or water affects it.)

When God looked at what he had done on the fourth day, he said it was good also.

Reflection: Before craft time, allow students to think of ways they can help take care of the earth God has created.

Instructions:
• Trace the child's hand onto paper and cut out the prints. The kids can trace each other’s handprints.

• Make twelve handprints (4 of each color).

• Cut out the prints and glue to template to form a wreath.

• You can decorate the wreath further with stickers (like flowers, birds, butterflies, or anything nature related).

• Let children finish the sentence. Color the template piece, and cut it out.

Song:
God in Heaven Made the Earth
(to the tune of Old MacDonald)

Take Away:
Let each child tell one thing they learned from the story about the third and fourth days of creation.

Enter to win a free copy of my newest book, Grits & Grace & God. Visit the following link and sign up: https://www.goodreads.com/giveaway/show/99040-grace-grits-god-manna-from-heaven-served-up-southern-style
at July 08, 2013